Lithium-ion vs Lead Acid Forklift Batteries: Which Are Best?

Especially in recent years, the world of batteries has grown to include a plethora of very different options. They all achieve the same thing, but their ease of use, safety, reliability, efficiency, affordability and environmental impact all vary significantly – which can make it difficult to choose. Luckily, for those of you who depend on forklifts to run your businesses, the choice essentially comes down to two preferred types of forklift batteries: lead acid and lithium-ion.

Choosing which battery to use in your forklift is an important decision that affects how smoothly your business will operate – whether you’re working with an entire fleet or just a single vehicle. For many, selecting between lithium-ion and lead acid batteries simply comes down to a cost and benefit analysis.

So, let’s look at how they stack up.

How Are These Batteries Different?

Lead acid battery technology is a century and a half old, having been first successfully invented back in 1859. The technology has greatly improved since then and has held on until the present day.

Lithium-ion battery technology, on the other hand, was first introduced in 1991, when Sony put them on the market. These revolutionary batteries make every modern convenience possible today: smartphones, tablets, Teslas, etc.

The most important difference for these two types of batteries, when it comes to powering forklifts, is their ease of use. lead acid batteries require 8 hours to charge and 8 hours to cool down, ambient-controlled storage rooms, heavy swapping practices, exposure to corrosive acid, watering maintenance and other time-intensive routines. Lithium-ion, on the other hand, simply needs to be plugged in for an hour or two when the battery gets low on charge.

Price is an obvious decision factor. The initial cost of lead acid forklift batteries are less expensive up front than lithium-ion. But when you factor in the hours of maintenance, impact on productivity and overall battery lifespan, lithium-ion batteries provide a far lower total cost of ownership.

The two batteries have some key differences that seriously impact their effectiveness when used in commercial forklifts.

When it comes to efficiency, it’s hard to beat the more modern lithium-ion technologies. While lead acid battery technology has been refined since it was first invented, they don’t hold nor sustain as much power  as lithium-ion. 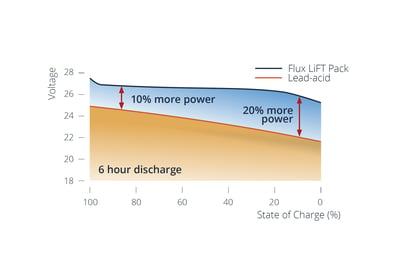 This is because lead acid batteries are constantly bleeding energy: they lose amps when they are charging, discharging, and also when they are just sitting idling. Their voltage drops at an increasing rate once they start discharging, so forklifts can get sluggish as the shift goes on.

Lithium-ion batteries, however, maintain constant voltage levels through the whole discharge cycle – a much more efficient system that can lead to smooth operations and as much as 50% energy savings when compared side-by-side. Lithium-ion also stores about three times as much energy.

Both lithium-ion and lead acid batteries can deteriorate in quality if they aren’t charged properly, but the former certainly takes less work and thought than the latter.

Lead acid units take about 8 hours to fully charge, but that’s only the beginning of the story. After the initial charge, lead acid batteries must cool down for about 8 hours. lead acid batteries should be charged to capacity, but no longer than necessary, and the charging process shouldn’t be interrupted. If these tips aren’t followed, you will get fewer cycles out of your lead acid battery in the long-run, which weighs on your business’ costs.

Lithium-ion batteries, on the other hand, can take between just one and two hours to fully charge. Lithium-ion can also be “opportunity charged” during breaks, even when it’s still attached to the forklift. That means that, unlike lead acid batteries, you don’t need to have a fully-charged spare waiting to replace the dying one or waste space in your place of business for charging stations or battery storage rooms.

The charging routine isn’t the only maintenance that lead acid batteries require. There are a number of things that need to be looked at regularly:

Meanwhile, lithium-ion batteries perform cell balancing/equalizing automatically when they are charged to 100%. There is no fluid to deal with and ambient temperatures have less effect on lithium-ion.

When it comes to maintenance, lithium-ion forklift batteries certainly come out on top.

How Long Do They Last?

The service life of lead acid batteries is, in general, around 1500 cycles. That number, however, is greatly impacted by the use and maintenance of each battery. Not properly charging, storing, or equalizing the battery will reduce the number of discharge cycles that a battery can handle in its lifetime.

What About Safety Concerns?

Another big difference that businesses need to consider is the safety of their employees who have to work with these forklift batteries personally. After all, both of these batteries are driven by powerful chemicals.

Lead Acid forklift batteries are made from toxic lead and sulfuric acid, which – as you probably already know – aren’t anywhere close to healthy for humans to ingest. These batteries must be watered weekly, which leads to risk of spilling the dangerous acid if it’s not done safely. They also generate a lot of heat when they are charging, so they should be kept in a temperature-controlled room (which also costs money) and properly vented. On top of that, they can even spew out an explosive gas when they reach the top of their charge.

Lithium-ion batteries from Flux Power are built with one of the most stable lithium-ion chemical combinations out there: Lithium-iron-phosphate (LFP). The cells are completely sealed, so there is no risk of spills. The only potential risk is that the electrolyte is flammable and one chemical component inside lithium batteries produces a corrosive gas when it comes in contact with water. But, because lithium-ion batteries are sealed, there is no corrosion, sulfation, acid spills or contamination to worry about usually – which is much better for the environment as well.

As you’ve probably noticed by this point, lithium-ion forklift batteries – while cost more upfront – they are less expensive over the long term, much easier to deal with and safer in general. They are even more attractive when you consider how much longer they last and how much less maintenance they require compared to lead acid forklift batteries.

It’s important for businesses to weigh the pros and cons of each battery and determine what makes the most sense for their particular forklift operations.