For companies that use lead acid batteries to power their material handling equipment, how long their batteries last and how well they perform is critical to their operations.

The maintenance of lead acid batteries plays an important role in both of these outcomes. If not properly maintained, a battery’s lifespan and performance can diminish - impacting efficiency and increasing costs.

Here are some of the most common maintenance mistakes that companies make when servicing lead acid batteries and why lithium-ion batteries are a better alternative that avoids or reduces the likelihood of these issues occurring.

If a lead acid battery is not returned to its full charge after it has been used, it will be undercharged and there is a risk of damaging it.

Unlike lead acid batteries, lithium-ion batteries can be opportunity charged. Partially charging a lithium-ion battery does not damage it and is more convenient because equipment operators can charge the battery as needed during breaks or shift downtimes. And, this doesn’t impact its average lifespan of 2,000 cycles. 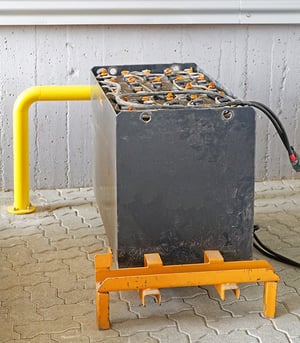 Overcharging a lead acid battery can be just as harmful as undercharging it. If workers leave the battery in a continuously charging state for long periods of time, corrosion of the positive battery plates can occur.

Lead acid batteries can also get very hot while charging. So, if workers overcharge a battery, it can cause damage on the inside due to longer exposure to excessive temperatures.

The odds of this occurring are greater when workers allow the battery to experience a deep discharge, requiring extended time to return the battery to full charge.

If a lead acid battery overcharges and overheats, pressure generated from the hydrogen and oxygen gas must be relieved or it can rupture.

Built-in controllers prevent overcharging, in order to prevent dendrites from forming that can cause significant damage to lithium-ion batteries.

lead acid batteries are filled with an electrolyte solution (sulfuric acid and water) and feature a removable top. They generate electricity through a chemical reaction of the lead plates and sulfuric acid. This type of battery requires regular refilling with water or the chemical process will degrade and the battery will suffer an early failure.

One of the biggest mistakes workers make is under watering the battery. If water that is lost during the charging process is not replenished and the electrolyte levels drop below the top of the plates, significant damage can occur.

In hotter environments, water depletion can occur at an even faster rate.

Over watering can cause significant damage to a lead acid battery as well. When a battery is over watered, the electrolytes become diluted. This will diminish the battery’s performance.

Over watering also creates the risk of the spillage, which is a dangerous mixture of toxic sulfuric acid.

Other mistakes that can impact the performance and lead acid battery life include:


Other Reasons Lithium-Ion Batteries Are Better

one major equipment manufacturer will save over $1 million by switching to lithium-ion.

You can read more about the safety benefits that lithium-ion batteries provide to companies that use material handling equipment in our article,