How A Forklift Battery Weight Impacts Your Operation

If you use forklifts in your business, you know the importance of finding the right type of battery.

What many don’t take into consideration, however, is how the weight of your forklift battery plays a significant role in the overall costs of your operations.

Below, we’ll explore how the weight of your batteries directly impacts other areas of forklift operation that should be addressed, from where batteries are stored to equipment needs. 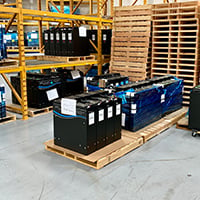 Electric forklift batteries weigh a ton, sometimes literally. They can range anywhere from 1,000 pounds to 4,000 pounds, depending on the type of forklift. And, there are  many factors that determine each battery’s final weight.

In most cases, higher voltages and capacities translate to a heavier battery. However, depending on other circumstances, such as the actual width and height of the battery, the heaviest 24 volt battery may weigh more than the lightest 36 volt battery.

A battery’s composition plays a significant part in how much it weighs. While electric forklifts are powered by either lead-acid or lithium-ion batteries, the technology behind each type differs greatly, affecting not only the battery weight, but the overall efficiency of the forklift.

Lead-acid batteries are the more traditional choice for powering forklifts. This type of battery is filled with liquid and comes with a removable top so the water level can be maintained. Lead-acid batteries generate electricity through a chemical reaction of lead plates and sulfuric acid.

Lithium-ion batteries, on the other hand, are a newer technology and can feature many different chemistries. One of the most popular for the material handling industry is Lithium Iron Phosphate (LFP). This type of battery chemistry allows a battery pack to be  more compact and energy dense than lead-acid, and the cells are sealed shut, so no water maintenance is required.

They also typically weigh less than a standard lead-acid battery, which can be by as much as 40% to 60%.

Why do lithium-ion batteries weigh so much less?

Lithium itself is a light metal. Lithium-ion batteries also have a much higher energy density, allowing them to be smaller in size and weigh less. 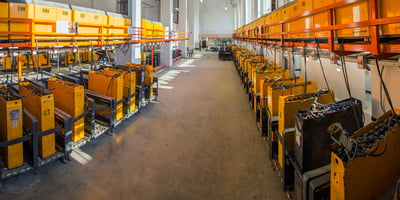 Another component that affects your operation involves considering whether you have the storage available to support the weight of the battery, especially if you have a large number of forklifts.

Because of this, lead-acid batteries require one or more well-ventilated rooms. If you have multiple forklifts in your operation, you’ll need space for multiple chargers and an area for the batteries to cool down after fully recharging.

The weight of one battery alone can be significant. If you have dozens of forklifts in operation, you’ll need heavy duty racking that can withstand the weight load of storing all these batteries.

The benefit of lithium-ion batteries is that they do not need to be removed in order to be charged...they can be directly plugged into a nearby charger while remaining in the forklift. They can also be opportunity charged in between shifts, making storage a non-issue.

Along similar lines, because lead-acid batteries require removal from the forklift in order to be charged, you’ll need to invest in the proper equipment that can lift the batteries out of the forklifts several times a day.

Lithium-ion batteries, on the other hand, don’t need to be removed from the forklift to be charged on a daily basis. This means that equipment is only needed to place the battery in the forklift at the beginning of service and at the end of the battery’s lifespan. Therefore, the equipment won’t be subjected to daily wear and tear, and you will need far fewer movers and transporters since they won’t be used nearly as often.

The weight load capacity of the equipment is especially important. If a battery is too heavy for what the equipment can handle, the mover or transporter may tip, causing injury to your workers and damaging the battery.

Labor costs can significantly add up when using lead-acid batteries because they require a more labor-intensive process when a battery must be charged:

Directly impacting these labor costs are the average run times for lead-acid batteries. Lead-acid batteries generally last between 5 and 6 hours, which means that the above battery charging process will need to be done at least once for each 8-hour shift that a forklift is in operation.

Lithium-ion batteries, on the other hand, have a run time between 7 and 8 hours, can remain in the forklift for charging, and simply are plugged into the charger for opportunity charging in between shifts or during worker downtime.

One multi-shift major equipment manufacturer found it was spending approximately $4,800 every day on lost productivity associated with the removal and re-installation of lead-acid batteries for charging. With 300+ operational days per year, that’s a cost of nearly $1.5 million spent simply on swapping out batteries!

You can read about their story in our article, How A Major Equipment Manufacturer Will Save Over $1 Million By Switching To Lithium-Ion.

While many fleet managers examine characteristics like run time, battery maintenance and energy efficiency when choosing a battery, they often don’t realize the significance battery weight plays in their operation.

In conjunction with their weight, lead-acid battery charging requirements play a much bigger role in increased  operational costs  that many companies don’t consider ahead of a purchase.

Because they are the far lighter option, lithium-ion batteries provide several additional benefits over time, from an increase in  efficiency to safety enhancements that benefit both the company’s workers and bottom line.